The greatest gift of doing a blog tour is being able to touch base with old friends, and Cinderella Stories and I go back a long way. That’s one of the great things about the Internet, isn’t it? Being half a world away doesn’t really mean a thing when it comes to associates and acquaintances, and that is truly a blessing. So it’s an honour to be back as a guest and a friend, and I’m looking forward to sharing with you all the newest release in my Wolf series: Wolf, in League. For those that are joining the tour for the first time, welcome! And for those who have been here before, it’s amazing to see you again.

As I’ve done with the rest of the tours for these Wolf releases, this blog tour and giveaway is all about teasers. Tiny teasers, to be most accurate, which I like to think of as nothing more than a “bite” to whet your “appetite” for the rest. But before I let you get to it, I want to let you know about the giveaway that comes along with the tour. Follow through to the end of the post to learn how you could win your very own signed, print copy of Wolf in League, a “crystal and silver” diamante Howling Wolf Pendant, and a $20 gift certificate to the Less Than Three Press book market.

And now, the teaser, and an inside—or should I say outside—look at the GDBCG…

It wasn’t the stars that drew him here in the wee hours of the morning, though. It was the bats. There was something about the construction of the Center that drew a bucket load of bats, not that Matthew could have said what it was. The thing he found most interesting about the phenomena was that one could find them swooping and swaying around the building’s concrete block walls and its flat, thermoplastic roof at times other than the hour or so between dusk and darkness. Common sense told Matthew it had to do with insect population, reflective lighting, and a lack of predators, but the owls and hawks that were common to the area made that last reason somewhat unlikely.

Who really knew, though? Maybe the same things that kept the doctors peeking covertly at dark shadows kept the smarter birds of prey away as well. Regardless, Matthew found himself staring at the tiny, black, soundless beasts for stretches of time that surprised him when he finally thought to check his watch. For creatures of the night with all kinds of Hollywood superstitions behind them, they were surprisingly peaceful to watch.

He’d just told himself that he’d better be heading back in when a sound seemed to brush past his ear. He cocked his head, paused, and listened. He almost thought it could have been one of the bats, drawn by the light or maybe the scent of his cologne, but if it had been a bat, then it was one of the most talented bats in history. Because there’d been something awfully weird in the way it had sounded. If he’d been asked to say what that oddness was, he would have had no choice but to admit—foolishly, really—that he’d heard someone speak. His name, even. Which was more ridiculous than imagining someone had spoken in the first place. He was six stories off the ground. He could see every inch of the otherwise empty balcony. Besides, there was no one else on the level Matthew occupied but for a security guard who had been half-asleep, if not completely asleep, when Matthew had walked past him twenty minutes ago; Matthew had checked the sign-in roster just to make sure because he’d wanted to have a chat with one of his colleagues regarding a certain finding Matthew had stumbled across the night before. And there were no after-hours visitors allowed, without exception. Even during the day, not even an expected guest would get past the security gate without a badge—a badge which automatically added their name, picture, and personal details to the roster so that anyone who was anyone would know where they were allowed to be and where they were not. If there was someone out in the darkness whispering his name at barely audible levels, it had to be one of the bats. Or a very talented deer with the ability to fly.

Matthew flipped up his collar, shook his head and turned back to the door that he’d left propped open behind him. The doors were all glass. The windows were glass. Glass, glass, everywhere glass. He’d often figured it was there for security more than just an effort to soften the rest of the cold concrete building. After all, it was easy to see through; nothing could hide behind a glass door. It was also reflective.

So when he saw a face—a smirk, bright eyes, sharp cheekbones—shining back at him, Matthew startled. He whirled back to face the balcony.

There was no one there. Just the stars and bats above him, and the trees, manicured lawn, and fading gardens below him.

It’s been months since anyone at the Committee has had any contact from the O’Connell family or their pack members, and they are not happy. Suspicious of the activities that took place in D.C. and determined to find out what the wolves are up to, the Committee recruits one of their newest residents, Doctor Matthew Dietrich, to play the part of neighbor and infiltrate the family.

Matthew has always been a keep-to-himself kind of person. Though idealistic and optimistic, he prefers to work in solitude, at night, while he researches the findings that he hopes will one day change the world. When he’s approached by the executives of the Center, he has no idea why they’d choose him. And to say he is skeptical over the concept of men that can shift into wolves would be an understatement. Until he meets his new partner, the man that will play the part of his “husband” in the Committee’s scheme, Doctor Gavin Strauss.

Notes: Wolf, in League contains some explicit and violent content

Book 3 in the Wolf series

Purchasing Link – save 15% by preordering your copy today! Discount available until October 10th

On behalf of the tour, please join the giveaway by taking part in the Rafflecopter below. The prize consists of a signed, print copy of Wolf in League, a “crystal and silver” diamante Howling Wolf Pendant, and a $20 gift certificate to the Less Than Three Press book market.

For all the terms and conditions, please check out the t’s and c’s posted on the Rafflecopter.

** Please note that this giveaway is being offered tour-wide and there will be one winner awarded for the entire event. 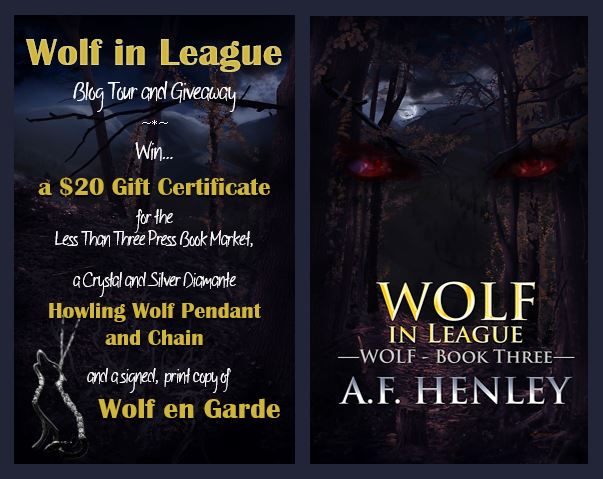 Again, a great big thank you to Cinderella Stories for having me today. And my thanks to you as well for joining in. Best of luck with the giveaway and I hope you enjoyed the post!

Henley was born with a full-blown passion for run-on sentences, a zealous indulgence in all words descriptive, and the endearing tendency to overuse punctuation. Since the early years Henley has been an enthusiastic writer, from the first few I-love-my-dog stories to the current leap into erotica.

A self-professed Google genius, Henley lives for the hours spent digging through the Internet for ‘research purposes’ which, more often than not, lead seven thousand miles away from first intentions but bring Henley to new discoveries and ideas that, once seeded, tend to flourish.

Henley has been proudly publishing with Less Than Three Press since 2012.

For more information, please stop by for a visit at afhenley.com.

27 thoughts on “Wolf, in League by AF Henley: Blog Tour and Giveaway”