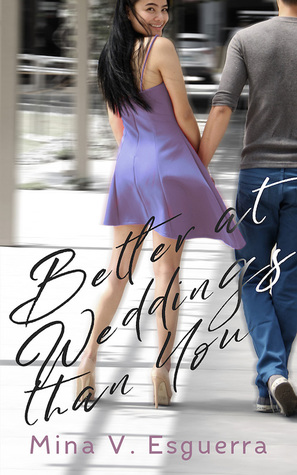 Daphne Cardenas is the best wedding planner around, and everyone knows it. That’s why her friend Greg hired her as an emergency replacement one month before his wedding—because he fears his fiancée Helen is falling for the guy they first hired for the job.

Aaron Trinidad is new to the wedding industry but years of conference planning and loads of charm make him good at it. Really good at it. Planning the wedding of his friend Helen should be easy, and it is. To be unceremoniously fired isn’t good for his new career, but the chance to learn from the best might be the silver lining.

Aaron and Daphne have chemistry, but there’s history with Helen that at least one other person considers a threat. Who’s the planner who can fix this impending disaster?

(Part of the Chic Manila series, but can be read as a standalone.)

Mina V. Esguerra writes contemporary romance and young adult novellas. She has a bachelor’s degree in Communication and a master’s degree in Development Communication, put to good use in her work as trainer and content management consultant. Mina lives in Metro Manila, Philippines, with her husband and daughter.

She finds inspiration in the lives and experiences of other people, so the answer to “Is this story based on you?” is always, always “No.”

I received a free copy of this book in exchange for an honest review.

Eddie and Kaeva are two of such people. In this book we feel their fears, their pain, and the great lengths they go through to isolate themselves–to ensure they do not harm others.

I love Breaker (Exile #1) because of these two relatable characters. Like everyone else they seek for their true purpose in life. I also love that they are a walking contradiction. They are strong and yet they are weak, flawed. They are independent and yet they continue to long for that someone who will make them whole. They want to be alone and yet deep down they know they can’t. The loneliness for living alone is heartbreaking.

Five stars for Breaker (Exile #1). I hope to read more about Rivet, Mecken, Oberon, and Lake.

The cab slowed. It was one of many moving along the six grid lanes that would take them into the airport, and Eddie eyed the fading afternoon sky through the dirty windshield. The sun always seemed to set so fast in the metro centers, and Chicago was one of the worst when it came to heavily polluted metropolises. At home—in any of the rural developments, really—it was easy to forget that large stacks had once puffed unfathomable quantities of filth into the air, and had damn near poisoned the entire planet. Here, though, on what the books used to call Interstate 90 and what they now called Gridline Ninety, where the damage had lingered and everything from lungs to concrete finishes had suffered, it wasn’t hard to believe in the slightest. The entire city wore the scars of humanity’s abuse.

The airport loomed to the right of the grid lanes like a giant gray beast. Its old fashioned concrete exterior had a faded, dismal appearance. Not worth the trouble to tear down, a large tower still stood in the middle of the property, but it was no longer used for air traffic control. When he’d taken an interest in air travel a few years prior, the ‘Net had cheerfully told him all about the computer programs and grid-style management that the airlines had developed back in pre-Cure days.

Post-Cure advancements were vague. The ‘Net had advised him that most of his questions were of a classified nature. “Security management”—Security breach – search failed, please try again—and “Proprietary development”—Classified information, please try again with a different search—were not discussed.

Gillian had not been the only person on the planet with extra special talents, everyone knew that. And on more than one occasion Eddie had wondered if those “afflicted” people now ran the airlines. Someone with the right power to control heavy machinery. Someone who could save the airlines, which were all government controlled, some serious cash when it came to pilots and equipment maintenance. A human slave who carried the title of “Estranged” and worked under the scrutinizing eye of government officials.

Of course, his mother had told him the idea was ridiculous, that nobody used the Estranged for anything good. Ever. That was why they had to keep Eddie’s little “issue” a secret. No one could know. She’d make sure she kept him safe and out of the sights of the government if it killed her. If for no other than she couldn’t bear the thought of her friends finding out one of those belonged to her.

He heard her speak as though she sat next to him, “Do you want to end up like Gillian?”

In the wake of several near-cataclysmic events, humanity created the Cure, a DNA-altering antidote to death by disease and old age. But all cures come with side effects: a small percentage of the population develops a wide range of powers, some of which are lethal to others, and some which are lethal to the wielder.

These people are called the Estranged, hunted and shunned, safe only on the Island of Exile. It is here that Kaeva and Eddie meet—and where they set a prophecy in motion, quite possibly sealing their own demise, and even the end of Exile.

Notes: contains some explicit content and includes thoughts and discussions of past and potential suicide

Kelly Wyre enjoys reading and writing all manner of fiction, ranging from horror to romance. She used to work in advertising but is now happily chained to her writing desk and laptop. Kelly relishes the soft and cuddly and the sharp and bloody with equal amounts of enthusiasm. She’s a coffee addict, a workaholic, a chronic night owl, and loves a good thunderstorm. Currently Kelly resides in the southeastern United States.

Henley was born with a full-blown passion for run-on sentences, a zealous indulgence in all words descriptive, and the endearing tendency to overuse punctuation. Since the early years Henley has been an enthusiastic writer, from the first few I-love-my-dog stories to the current leap into erotica. A self-professed Google genius, Henley lives for the hours spent digging through the Internet for ‘research purposes’ which, more often than not, lead seven thousand miles away from first intentions but bring Henley to new discoveries and ideas that, once seeded, tend to flourish. Henley has been proudly publishing with Less Than Three Press since 2012.