If you could utter a prayer for me and my family right now… for my sister-in-law Ate Thess who is fighting for her life… please do. It’d truly be a gift of a lifetime for us.

From my family to yours, thank you so much. God Bless us all. 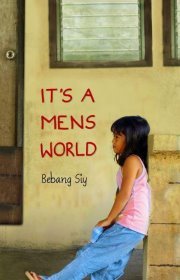 Nagustuhan ko ito dahil kahit seryoso ang tema ay may humor na kalakip. Na para bang sinasabi na ganun talaga ang buhay, nangyari na, what’s  important is that after the pain is gone, that we can look back and be able to smile or laugh at ourselves for our antics. But that at least, now we know better.

The Chase and the Catch by A.F. Henley

Hi guys! Thank you for being with us today. I can’t begin to tell you how much I love The Chase and the Catch. I may or may not have cried while reading it lol. 🙂 Drop us a line or two for a chance to win an ebook copy of Forty-two Stairs. Don’t forget your Rafflecopter entries for a chance to win the grand prize.

On another note, I hope you’ll drop by on December 02 again for A.F. Henley’s guest post.  And of course I’d also like to thank him for this awesome book tour. 🙂

Now, on to TC&TC’s excerpt and giveaway, may Lady Luck be with you! ❤

After one of his fans committed suicide, John lost everything: lover, confidence, drive. When he is given a chance to get back on his feet, he is happy to take it—even if it’s just writing an actor’s autobiography. It might not be romance, or even fiction, but it’s something, and there are worse people to work for than the charming, successful Parker Chase.

That doesn’t mean working for Parker is easy, however. A staunch supporter of living for the moment, Parker goes against everything John believes in. He feels out of place in every moment of Parker’s Hollywood life, stuck in a game of wits that at times seems almost contrived…

Brilliant sunlight shot daggers of pain into John’s eyes and he fumbled for his sunglasses with one hand, blocking with the other, as if, somehow, a single leather-gloved hand would do any good against the assault. Snow had fallen the previous night and everything gleamed with the lustre of freshly polished silver. The parking lot was a postcard-worthy image of pristine white surfaces surrounded by burdened evergreen branches and puff-capped fence posts—the kind of scene that a year prior would have found John dragging out his tablet, inspired into tapping words about flush-cheeked kiddies or curiously joyful rodents. Now the view just made him want to growl about delays and inconveniences.

“Did you call ahead?”

John adjusted his sunglasses, flipped up his collar, and thumbed at the dash of the car. “Yeah. No flight delays. Pop the trunk, will you?” When his sister didn’t react, John tilted his head and sighed. “What?”

She didn’t hesitate, but then Jenna never did. With everyone in his life still treating him like he was going to explode into a million shards of anxiety every time he opened his mouth, Jenna could be counted on to speak when she felt like she needed to. And even the times when she just damn well wanted to. “You don’t have to do this.”

“Actually, no, I really do.” He worked up a smile. “I mean, I could drive, but the weather’s kind of shitty and it would take me something like thirty-five hours.”

“I don’t mean the flying and you know it.” Jenna snagged his jacket when John reached for the door handle. “You don’t have to run off and do this. The writing will come back to you when you’re ready. Since when does a person trade poetry and romance for scribbling down some guy’s autobiography?”

John held up a finger. “Biography. My perspective. An autobiography would be—”

“What the fuck ever. Don’t change the subject. Let’s just say that this does end up being a good thing for your career.” She caught his gaze when he looked up with another smile, and pursed her lips. “It won’t be. But regardless. Why do you have to go down there? Why can’t you do it like a normal twenty-first century human being and use Skype? Or you know, the telephone? Why do you have to be a billion miles away from home? I can’t be the only one who thinks this isn’t the smartest idea you’ve ever come up with. You haven’t exactly been…” She tapped her temple. “Well.”

John rolled his eyes and drew a snort of disgust through his nostrils in the extended, too loud way that he knew drove her crazy.

Jenna’s grip tightened into a fist. “Seriously. I’ve done some research on this guy, John—”

“I’m just not sure you’ve thought this all the way through. The guy can be an asshole. Self-centered, pompous—”

He disengaged Jenna’s fingers from his coat, placed her hand on the seat, and patted the back of it. “I’m sure his fans would disagree. As a matter of fact, most of them would have you drawn and quartered for even daring to think such a thing.”

“I couldn’t give a single fuck about any of his fans.” Her fingertips began to play a beat on the vinyl seat. “I care about you. And you already feel bad enough without immersing yourself into the life of a narcissist—”

John whistled through his teeth. “Harsh.”

John rolled his eyes and snapped the handle of the door. The onslaught of cold air was immediate. A good thing, John decided. It would get him out of the car that much faster if Jenna was shivering like a Chihuahua. “I’ve read the blogs. And I’ve read his Twitter and stalked his Tumblr and, and, and. He’s interesting. There’s a good story hidden behind that damn mask he’s been wearing for the last decade, and I want to be the one to dig it out.”

“No.” John drew himself out of the car and then turned back to lock up their eyes. “I write. Plain and simple. Now, please, pop the trunk. Because if I miss this flight due to the fact you’re holding my luggage hostage, I swear to God that I will make you pay for the next one. First class, nonetheless.”

He shut the door with a solid swing and walked to the back of the car to wait for the latch to release. The sound of the trunk popping was almost simultaneous with the clunk of the driver’s door opening.

“You call every day,” Jenna said, rounding the car, the high heels of her boots managing to click soundly even through the layer of snow. “I mean every fucking day.”

John dragged two suitcases out of the car and nodded at the open trunk. “I will. Get that for me, please?”

She ignored the trunk to worry her hands against one another. “And take your medication.”

“I haven’t been on meds for weeks now.” It was somewhat of a lie, but John soothed himself with the thought that the statement was mostly true. He still took the sleeping pills, but the antidepressants were gone. Thank fuck.

“By doctor’s orders or your own?” Jenna’s glare was colder than the wind.

John leaned forward, kissed Jenna on the cheek, and turned towards the glass doors of the airport. “Be good, Jen. And get back in the car before you freeze to death. Mom would kill you if she saw you out here in that jacket.”

“No time.” He kicked the silver disc that would operate the automatic door. “Flight’s probably already boarding.” He slipped through the half-open door. “Drive safe.”

John bit back the reaction to tell Jenna she could invent new ways to penetrate the man with large, unforgiving objects, and pass them on to Sam in graphic detail. Instead: “He won’t.”

She was still standing beside the open trunk when he turned to walk away. She was worried. They all were: his agent, his parents, and his friends; her husband Mark, and probably both their terriers and their entire tank of fish. Not that he could blame them. It hadn’t been a good year. He’d always been able to use his writing to get him away from his problems, a retreat of sorts, where he could work things out in his head before having to deal with them. So when the words had abandoned him, be it in retaliation for the pills he’d taken too frequently, or because his brain was too busy focusing on the images of horror that kept playing through it, John had thought he was going to lose his mind.

Confusion had become depression. Panic escalated into obsessive-compulsive behaviour. He was no longer ‘that crazy writer.’ He was just fucking crazy.

“But this is writing,” John mumbled, staring at the flight board and trying to make his eyes focus on the words that would tell him where to go. “It’s still writing.” After all, what biography wasn’t spiced a bit here and there? Perspective was everything. And if Mr. Parker Chase—actor-extraordinaire, supposed-charmer, but potentially more-of-an-egotistical-dick-than-his-agent-would-like-anyone-to-know—was willing to let John be the one to offer that perspective, then it didn’t matter that the story wasn’t fiction. Or romance. Or even working its way towards a happy ending. He could live with the compromise just to be at it again.

For the time being, at least.

The Giveaway (please click on the image to join):

Now, just because you’ve stayed with me right to the end, I’m going to pop in the Rafflecopter entry link, and let you all have a chance at winning. What can you win? How about a pretty little Swarovski crystal spider clip, a $20 gift certificate to the Less Than Three Press book market, and a signed, print copy of The Chase and The Catch (when available).

** Please note that this giveaway is being offered tour-wide and there will be one awarded winner for the entire event.

My huge thanks to Cinderella Stories for having me by, and an extra special thank you for your request. It’s been an honour to be here.

Henley was born with a full-blown passion for run-on sentences, a zealous indulgence in all words descriptive, and the endearing tendency to overuse punctuation. Since the early years Henley has been an enthusiastic writer, from the first few I-love-my-dog stories to the current leap into erotica.

A self-professed Google genius, Henley lives for the hours spent digging through the Internet for ‘research purposes’ which, more often than not, lead seven thousand miles away from first intentions but bring Henley to new discoveries and ideas that, once seeded, tend to flourish.

Henley has been proudly working with LT3 since 2012, and has been writing like mad ever since—an indentured servant to the belief that romance and true love can mend the most broken soul. Even when presented in prose.

Some of the stories in here, I’ve already read when I was only four years old–while some of them I’ve read when I was in high school. I particularly remember reading Efren Abueg’s Mabangis na Lungsod at four and it hit me hard. It was the realization that life out there can be cruel especially to orphans like me.

The stories in this collection were instrumental to my love affair with reading. These works were also what made me love Filipino works.

So to Agos boys, thank you! I could never thank you enough for making me love reading. Here’s to the book’s [almost] 50 years of existence! Cheers!