To make things even more interesting (or in Wayans and Tan’s case, awkward), Insider invited them to play a game of Have You Ever, confirming or denying any rumour, activity, or feelings ever linked to them. Dig in with us as we discover more of their relationship:

Wayans also has three tattoos relating to Tan: her initials CST (S for Samantha) right next to the lock tattoo on his chest, a line from her favourite Temper Trap song Sweet Disposition that talks about not surrendering, and the same flock of birds tattoo she had on her right shoulder on his right shoulder.

From: The Real Score by Kesh Tanglao

Intrigued? Join the giveaway for a chance to win a copy of the book by simply clicking the link below:

Title: The Real Score (Gezellig #1)
Author: Kesh Tanglao
Date of Publication: August 28, 2013
Genre: contemporary romance/chick-lit
About the book:
Caitlin’s friendship with Marcus, the de facto frontman of the world’s biggest boy band Gezellig, has long been an object of scrutiny by almost everyone–their friends and families, the media, and his fans–ever since they “went public” a couple of years back. Who wouldn’t be interested? She was a nobody, catapulted into the limelight of his fame when he struck an unusual friendship with her.

To both Caitlin and Marcus, what they have is a “perfect little thing.” But then something comes along and threatens it.

In a no-holds-barred interview, will they finally be forced to settle the score?

Kesh Tanglao is a full-time market researcher. When she’s not crunching numbers, she spends most of her free time watching TV shows, listening to music, and reading. Also a self-proclaimed fangirl, she likes cheering for her favorite sports teams and supporting her favorite artists. 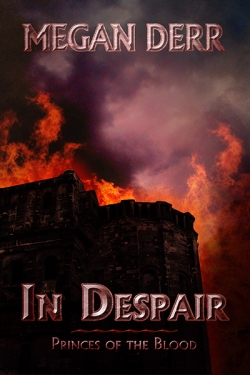 In Despair (Princes of the Blood #3) by Megan Derr
Publisher: Less than Three Press
Main Characters: Prince Telmé Guldbrandsen, and Korin, heir to the Reach of the House and the Temple of the Sacred Three

Prince Telmé Guldbrandsen has been groomed since childhood to become a Prince of the Blood and Commander of the Legion. He will be the youngest person to ever take the Blooding—if he can behave long enough to prove he can be trusted with the responsibility. But behaving is difficult when he is constantly forced to endure Korin: heir to the Reach of the House and the Temple of the Sacred Three, and the snotty brat Telmé is expected to someday marry.

Then the unthinkable happens, leaving Castle Guldbrandsen—and the Legion—in pieces. Overwhelmed by fear and grief, Telmé convinces Korin to help him attempt the impossible. But rather than relief, Telmé’s triumph is met with anger and rejection…

This title is available for preorder and will be available at approximately 8:00 p.m. Eastern Time on July 8, 2014.

Megan is a long time resident of m/m fiction, and keeps herself busy reading, writing, and publishing it. She is often accused of fluff and nonsense. When she’s not involved in writing, she likes to cook, harass her cats, or watch movies (especially all things James Bond). She loves to hear from readers, and can be found all around the internet.