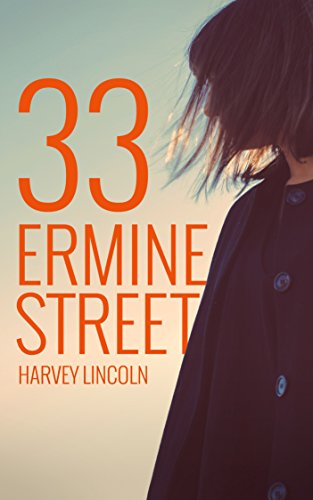 When I first started writing ’33 Ermine Street’ I intended to not only develop a strong storyline, but to create a central theme and develop the characters around it. In practice this meant spending the first six months doing nothing else other than sticking post-it notes against a cupboard door. Each note contained little parts of the story, character ideas and settings etc. When I felt I finally had what I wanted I started to type up small and very rough parts of the story, alongside doing quite a bit of background research to fill in any contextual gaps. In the end this process resulted in a 60-page outline of what was going to be the novel ’33 Ermine Street’.

I guess it sounds like a very methodical approach to writing, and I’m sure many writers would choose a very different approach to mine. My background as a designer was probably the reason behind this. People often think that being a designer is all about coming up with the most amazing ideas together with other free spirited designers. Well, it’s not really (sorry). It’s fun but it’s also hard work. Hard work that starts with research, endless sketching and keeping focused on the result you were aiming for all that time.

It was these skills that mostly helped me out with writing the novel. But there were more needed to complete it. I discovered how difficult it was to describe a scene the way I had it in my mind. In that sense, sketching it out is a lot easier. Words form an endless array of variables that you need to keep tuning until you get what you want. That was by far the hardest thing I learned.

Another thing I noticed, was how attached you get to the characters. Shen with his strong will, Alfred – the grumpy old man from down the road, and Sandeep – the local shopkeeper who was always ready to offer his advice. Although the characters are entirely fictional, they have all become dear friends of mine.

I truly hope that some of you will get to know them too. And when you do I hope you enjoy reading ’33 Ermine Street’ as much as I have enjoyed writing it.

“Religion is a human invention – love isn’t. It lives inside every person, no matter who they are, or what they do or do not believe in. Love is the only thing a person truly needs to believe in to receive love in return.”

Being an only child growing up in a Chinese immigrant family, Shen lives a relatively quiet and sheltered life in comparison to most other British teenagers. His parents, who ended up running a small Chinese restaurant, work tirelessly to make sure their only child is given the opportunities that they missed out on in life.

It’s a day like any other, when Shen becomes witness to a traumatic incident on his usual route to school. From that moment on, his peaceful and uneventful teenage life takes a drastic turn as he struggles to cope with the grim memories of that fateful morning.

Shen embarks on a very personal journey in an attempt to understand what happened. In the weeks and months that follow, he finds himself hurled into a turbulent world driven by fear, prejudice and social injustice.

33 Ermine Street is a touching yet confronting novel, set against the backdrop of a heavily polarized Britain.

Harvey Lincoln was born and raised in the south of The Netherlands. He lived there for many years before moving to the UK in 2002 where he studied for both a Bachelors and Masters Degree in Graphic Design. He has since returned to The Netherlands where he lives together with his English wife.
33 Ermine Street is his first novel.
Follow Cinderella Stories on WordPress.com